Don’t look at me 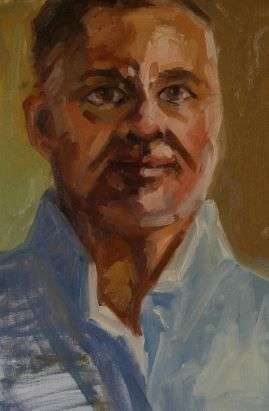 I’m not accustomed to having someone stare at me.  But when you ask someone to sit for you, and you’re not specific about where they should look I guess it’s only natural that they would look at you.

Sandro doesn’t speak any English, and my Italian… anyway.  He’s Rita’s brother.  She pretty much runs the school in this little village.  Rita said he would sit for me.  He’s stands with his arms crossed in a “don’t mess with me” kind of way. His classic face with the bent nose indicates that perhaps not everyone has listened.  “He is a good boy” Rita said.  Great!

I premixed warm and cool, dark and light skin tones.  I opened the shutter doors on one side and closed them on the other.  At 4PM I heard the door slam.  “Kelly” he said. “Up here” I replied.  Sandro walked in, smiled and said “Dove?” Uh…here, here.  I felt a small rush of nervousness come over me.  He took his position, arms crossed, and I began.

The stance was great.  I tried hard to get it fast, and I really wanted it.  ‘Put in the arms, chest, shoulders, chin – shit, only ½ a  head.  Scratch, lower everything, repeat… same result.  Momento, momento – I’m down 5 minutes already.  I really want the face –skip the body – QUICK, new canvas.  Clean /white – 7 minutes down…shape the head, chin, neck, nose, eyes – wow, they’re staring at me. I crack a nervous smile and got on with it.  My brush flickers around his face – light, dark, darker, lighter, cooler, warmer…shape goes up and around, nose bone moves out… meets the eyes…  oyh…they’re staring at me… wow, they’re intense…’

I made my way around his face, but I was sweating by the time I was done! I had to repeatedly expel long breaths of air to maintain composure. I lifted my arms like a chicken struggling to fly. I needed to circulate some air! I cocked my neck, shuttered my shoulders, flapped my arms one more time… Move forward; move on. 5 minutes left. He continued to stare.  It was his job, really.  Ding! Done.  Thank god.  I needed a glass of wine and an Advil.  He offered to stay longer but I couldn’t take it. Domani, Domani. He smiled and left.  I stood there taking deep breaths until my heartrate returned to it’s normal state.

It was uncommonly intense – unlike photographs.

Tomorrow I will paint Carole. She will be a more comfortable subject.  Then, Sandro is coming back for another 30 minutes. I want the stance, the arms crossed “don’t mess with me stance”.  I will put him in the sunlight, and make him look down at the street below.  No more chicken dancing for me.  I don’t think they stock oxygen in Monte Castello Di Vibio.

3 Responses to Don’t look at me

Oh my gosh, Kelly……he’s staring at me, too!! And that sly, leering smile on his lips…what could Sandro be thinking!!! Aunt Mary

Posted by Mary Ellen Jenkins · via sullistudios.com · 139 months ago

holy crapatolla aunt mary, he IS staring at you!!! I must have done a good job. I don’t know exactly what he was thinking – but it was the most intense 30 minutes of painting I have experienced in my lifetime. Seriously, tomorrow I’ll have him look at the street! So good to hear from you. Mom say’s your blogging junkies. So hard to think of mom as ANY kind of junkie – unless it involves church. I love you. Kelly

Posted by kelly · via sullistudios.com · 139 months ago

heh, great story. I usually tell my models where to look. Even put an X on a wall for them to focus on.
He’s cute! keep painting.