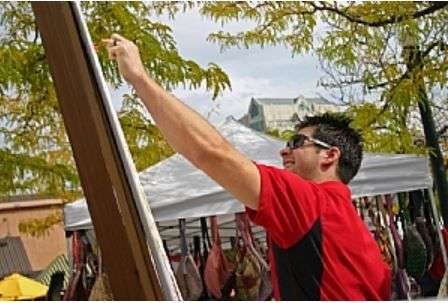 We drove home from CDA on Friday and made it into bed around mid-night. We were due at the farmers market by 8:30AM Saturday. My aging bones were spent and I selfishly wished for a raging thunderstorm that would render the market…undoable. I’m sure I dreamed of it a few times throughout the night, but awoke to realize it was only a fantasy. My biggest hesitation, barring exhaustion, was that we were not allowed any political promotional materials at the market, so the project needed to be verbally explained over and over. I was afraid a few die-hard republicans might participate and then be upset because they unwittingly finger painted in the name of democracy. I did my level best to ‘warn’ anyone interested in playing. The response to the project was overwhelmingly positive, but I think one may have slipped through the painting crack. The staff received an email that night from a non-supporter saying “we don’t want people like you and your wife representing Idaho – get out”. Well gee … all I did was finger paint! And it’s quite obvious we don’t represent ALL of Idaho – just the independent thinkers who make judgments based on science and the good of the majority. The other side has their representation, why shouldn’t we have ours. We would not be in this position if the Democratic party had not asked Tom to step up to the plate and take on Goliath. If any other seasoned democratic politician in Idaho had been willing to fight the good fight, we would be at home making lasagna and playing scrabble.

I’m not getting out, and you should be scared, ’cause once this paint gets on your clothes – it’s never comin’ out!

8 Responses to Get Out!!

When I first read this posting, the power of your raw feelings did several things to me all at once which only served to paralyze me–first, I immediately wanted to send you quotes from a book I happened to have in hand, I BELIEVE IN YOU, which then tangled up my mind as to which one or just all I should send; second, I decided what I wanted to offer was too personal for this forum so gave myself breathing room by deciding to send it to your SulliStudios address; then two minutes later, third, chickened out on everything because the intensity of what you wrote started to drown me and I was afraid maybe I’d misinterpreted and would then sound foolish–so I waited safely on the sidelines to see what others had to say…day after day after day I waited and–NO ONE commented!!!!! I was/am shocked and amazed, not to mention ashamed. You deserved more. So, Kelly, belatedly, Here are words that in my mind, define what you and your family are doing:

“YOU GET NERVOUS WITH NO ONE SUPPORTING YOU. PEOPLE DON’T ALWAYS HAVE THE VISION, AND THE SECRET FOR THE PERSON WITH THE VISION IS TO STAND UP. BUT IT TAKES COURAGE. YOU GET LONELY.” –Natalie Cole

“TO LOVE A PERSON IS TO LEARN THE SONG THAT IS IN THEIR HEART, AND TO SING IT TO THEM WHEN THEY HAVE FORGOTTEN.”–unknown

The last is what I imagine is you, Kelly, doing in this project–singing for your husband with your Fingersmears and your total support BEFORE the system wears him down.

It is presumptuous for me to think that a stranger’s comment on your posting would do the same for you, Kelly–because it sounds like your heart is stretched during this worthy effort–but you deserve to hear a rebuttal to those ugly words, “Get Out”.

So I stand up and shout, “YOU ARE THE BEST OF WHAT AMERICA USED TO SYMBOLIZE!” I, for one, am heartened to know that people like you still exist, and whatever happens, you’ve done the right thing in trying. More than most people can say about their lives, I’m afraid, so let’s hope that this time, the “right thing’ is rewarded.
And if so, then you can concur:

“IF I MADE IT, IT’S HALF BECAUSE I WAS GAME ENOUGH TO TAKE A WICKED AMOUNT OF PUNISHMENT ALONG THE WAY AND HALF BECAUSE THERE WERE A LOT OF PEOPLE WHO CARED ENOUGH TO HELP ME” –Althea Gibson

Posted by Diane Pool · via sullistudios.com · 137 months ago

Some people are just creeps Kelly. Seems to me that the more concerned folks are about not getting their way the more irrational their comments. Keep your head up, your talent in your heart and your family by your side. We are all there beside you as well.

Posted by philbin de got schulz · via sullistudios.com · 137 months ago

I’m really enjoying reading your “babblings” about being out in the state, meeting all kinds of people. This state is in the process of evolving and thats just hard (ok, maybe impossible) for some people. I’m glad you and Tom are here so I say: “STAY HERE!”

Posted by Deneen Bowen · via sullistudios.com · 137 months ago

I’m really enjoying reading your “babblings” about being out in the state, meeting all kinds of people. This state is in the process of evolving and thats just hard (ok, maybe impossible) for some people. I’m glad you and Tom are here so I say: “STAY HERE!”

Posted by Deneen Bowen · via sullistudios.com · 137 months ago

I say get out there!! Spread your love around the state!

Posted by Reed Sullivan · via sullistudios.com · 137 months ago

There’s always going to be the one or the few who, because they feel that their way of living may be threatened through change that will take them out of their comfort zones that perhaps the only recourse they may know is to threaten back. It’s just fear of the unknown…forgive them for they know not of what they speak.

Posted by Janet Dempsey · via sullistudios.com · 137 months ago

Great to see the heart and soul the Sullivan team has put into this project and see it today at the Boise City Hall Oct 30th WOW! just loved it.Great job….

Posted by Joe Alcala · via sullistudios.com · 137 months ago

Thanks everyone! Your support means so much! What an adventure this has been.

Posted by kelly sullivan · via sullistudios.com · 136 months ago
Success

This site uses Akismet to reduce spam. Learn how your comment data is processed.