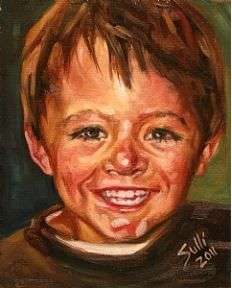 I took a singing lesson last week. I was painting a woman who explained to me that she started taking lessons from an 82-year-old man who claims ‘he can teach anyone to sing’.  I took this as a personal challenge.  I have always sung – in the shower, in the car, in the studio, and on one inebriated occasion, at a karaoke bar.  Generally, I reserve this expressive medium for when I am alone, or when I’m so emotional that I blast Carole King in the living room and sing along as my dear sweet family patiently wanders off.

I have not always been a reclusive singer.  When I was young I was sure I would be the next Stevie Nicks. Repeated pleas for silence from my siblings eventually caused me to reconsider career paths. They were not being cruel. They were right.  I had a bold voice with no sense of ….????  I never really knew, actually, except that it was apparently unpleasant.

I called Bob and offered him the challenge of his career. He accepted. While, I am not singing from rooftops just yet, at lease I now understand why I sound so bad.  It’s called pitch, and as a painter, I could relate it to value.  There is a high and a low, a light and a dark, and everything in between needs to relate – or it sounds and looks…unpleasant. This is basic, I know, but for me… a tardy epiphany.

He continued. “Don’t push.” I scrunched my face…Hugh? “You don’t have to ‘push’ out your voice. You can just ‘let’ it out,” he said.  He stated that I likely have a tenacious personality that is accustomed to fighting for what it wants.  HUMMMM??…who told him?, I thought.  “Your speaking voice has the same ‘push’ to it,” he said, “and by adjusting the ‘push’ to a ‘let’, you will not only improve your voice, but your life.”

Sensing my doubt, he asked if I ever get so frustrated with my canvases that I slash them when they are not going my way.  Bewildered, I shook my head. “Noooooo, never….my mind is never in that state when I paint.  Paint is what takes that state away. If it doesn’t work I just wipe it out and paint something else,” I explained.

10 Responses to Push to Let

I remember singing a few with you from the McNasty’s jukebox, long ago and far away! Yippee ei ay…Cow-Patty!

What a great lesson to learn for 40 bucks….it’s priceless information from a wise man! Paint on sister!

Posted by Lisa Young · via sullistudios.com · 134 months ago

Posted by Reed Sullivan · via sullistudios.com · 134 months ago

Love this portrait of this little boy. You’ve done an excellent job on it.
Hugs

Posted by Chae · via sullistudios.com · 134 months ago

Posted by mimi · via sullistudios.com · 134 months ago

You “always never cease to amaze me”………

Sing your heart out – but don’t push? He sounds like a great old guy!!

Posted by Ginny · via sullistudios.com · 134 months ago

I feel so fortunate to have met you. Your attitude inspires. Your work inspires.

Posted by Cheryl · via sullistudios.com · 134 months ago

Cheryl…. from the Hora??? Is that you? I feel blessed to have met you too. I hope your family still looks upon that piece of art with much love and affection. I’ll be on the east coast this summer. Perhaps a cocktail in the city…?

Posted by kelly · via kellysullivanfineart.com · 133 months ago

Hey – I am going to do some street art here in Kayenta in April. Makes me nervous. Haven’t performed in public with my art – oh well!!! I need to be gutsy like you!

Posted by GINNY · via kellysullivanfineart.com · 133 months ago

Yes, just be gutsy Ginny. You are fun and wonderful – they’ll love you, and your work.

Posted by kelly · via kellysullivanfineart.com · 133 months ago

Posted by GINNY · via kellysullivanfineart.com · 133 months ago
Success

This site uses Akismet to reduce spam. Learn how your comment data is processed.