From Italy to Idaho Politics 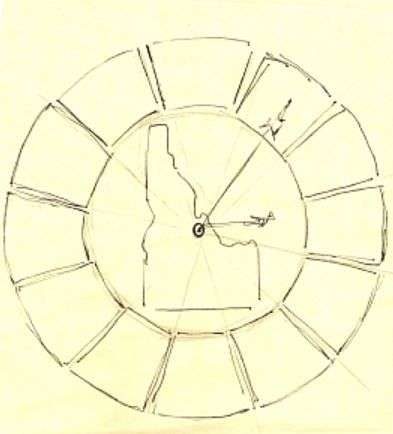 Until recently, I have never been inclined to follow politics. I have always thought that weeding through what is truth and what is fiction in the political arena would be more than a full time job, with little likelihood of ever really knowing the truth. The deception that I’ve always imagined lives there, might also strangle my creative spirit. So I’ve avoided it.

There is some danger in this naivete – I know that. We need leaders. Hopefully we can trust them to do the right thing. Hopefully their decisions are based on common sense, and the good of the people, not party politics or lobby agendas. I went merrily along with my head in the sand for years, but eventually I needed to come up for air.

Six months ago my husband told me he was going to run for US Senate because he was frustrated that no one in Idaho was willing to stand up against the incumbent. Now he is fighting a David and Goliath kind of battle. I’ve seen him use a slingshot. He’s got very good aim.

He’s always been a voracious reader, much of it about the history of this country and the people who formed it. He’s a self-made, honest, intelligent, man that has always understood the value of real people. Yes, I’m very proud of him. But yikes, what about me? In not exactly a typical Senators wife. I paint nudes, I’m often more absorbed in my career then his, my vocabulary sometimes skirts the edge appropriateness, and I’m not very good at biting my tongue.

Early on in Tom’s campaign I accompanied him to a small fundraising dinner, 8 people, very intimate. As I listened to him speak, I interjected in places I thought needed clarification. If he didn’t answer a question fully, I let him know. That’s the way we communicate – openly – honestly. Tom welcomed it – it was part of the process. I was escorted into the kitchen by the hosts and told “he’s doing just fine, you just need to keep quiet.” “I just need to keep quiet”?? Did I hear you correctly? Yes, apparently I did. I took a deep breath and smiled through the rest of the evening, then lost it when we got in the car. My dear husband was hit by a short tirade in my excitable east coast tone about how “I will NEVER be told to ‘be quiet’ again.” He of course, would never expect me to, and on the contrary, welcomes my opinions. Regardless, I chose to keep my distance these last few months and focus on art – which, for me, is way more fun than politics and equally as powerful.

But now it’s time for me to step up to the plate, for him, and I believe, for Idaho. My contribution will be art. We’re developing a state wide FingerSmear project called “Touching Time”. It will be a large functioning clock, co-created with participation from thousands of people across the State of Idaho. The FingerSmear project is designed to bring exposure to the campaign, and our need for change. It will symbolize the values Idahoans have long lived by, and the principals that Tom’s campaign is based on: Working together, with vision and focus, honoring the value of people, we will move forward to create a more vibrant tomorrow for Idaho, and the country.

I’ll blog through this project, which should be an interesting trip. Joining me will be our 10 year old son Liam, our 13 year old daughter, a few other artists, a small campaign team, and a videographer. We’ll be hitting the pavement on October 11th, and wrapping it up by October 27th – just in time for the election. I’ll send along more details as the project develops over the next week. If you want to help in anyway, just let us know. You can reach me through this website – or Tom through his. www.tomsullivanforsenate.com….and so it begins.

2 Responses to From Italy to Idaho Politics

Ha! Hi mimi. Yes, I may not fit the general bill, but that’s not a bad thing. We’re launching the FingerSmear tomorrow. Up working late on it. I think it will be a fun project.

Posted by kelly · via sullistudios.com · 137 months ago

This is truly amazing. I would love to know more about this art piece by you. Do stay in touch regarding this. Thanks Kelly Sullivan!

Posted by write my paper · via thebabblingbrush.com · 51 months ago
Success